I saw a fantastic sign on the topic of discount pricing at a nearby restaurant. Actually, it wasn't that fantastic. There's another word I'm looking for. Oh, yes: insane.

It would appear that my emotions have gotten the better of me. Let me say it more diplomatically. I would recommend that business avoid using similar signs. 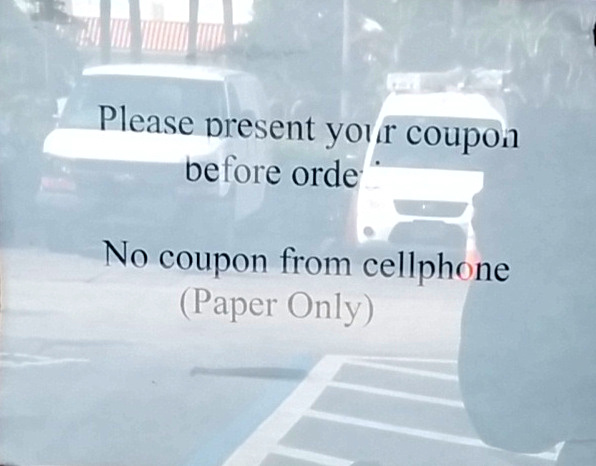 Apologies for those who can't make out the text. While I claim an expertise in the field of pricing of digital goods, my knowledge of outdoor photography is sadly lacking.

Please present your coupon before order

No coupon from cell phone (Paper Only)

First, the sign alerts diners who are willing to pay full price that there are discounts to be had. Forcing these folks to realize that they don't possess (or didn't receive) a coupon will result in the following:

Second, it will annoy folks who had a coupon on their phone, but didn't think to print a paper copy. If they were especially looking forward to eating at the restaurant, they'll enjoy it less - irritated at the fact they are being "cheated" out of their coupons and forced to pay full price. The fact that they had coupons on their phones, but could not use them, will feel like a technicality. Either that, or they'll simply choose to eat at another restaurant.

The shop would have been much better off to simply write "paper coupons only" on their coupons themselves. Then, the only people who would know about the coupons would be those who already have them. No one would have a digital copy and expect to use it for a discount.

My recommendation is great for the future, but at the present, it's of little value. Depending upon the discount, my suggestion is to prepare to eat the loss. Waiters could be instructed to make a special effort to upsell more expensive items as a temporary measure. One common approach is to offer a limited-time special (which is mainly "special" in name only) to those who intend to use coupons, in order to compensate for the discount provided.