One of my most common pieces of business advice is to sell cream and not milk. It sounds great, but what does it mean?

First, a quick lesson on milk production. Both milk and cream come from a cow. If you were to "milk" a cow, and allow the resultant liquid to sit in a pail, the high-fat cream would rise to the top, while the denser milk would sink to the bottom. The cream is considered the best part of the milk due to its superior flavor. As such, it commands substantially higher prices.

So what does this have to do with business?

Farmers soon realized that they had two options:

Many services are bundled together without anyone realizing it. In many cases, these services produce very different levels of value for the customer. Businesses can increase their income, efficiency, customer-satisfaction and prestige by focusing only on those offerings which produce the greatest amount of customer value.

After completing the first draft of my book on how to establish a price for software, I sent it out to some readers for feedback. Some comments focused on grammar. There were other comments that focused on my content. Both varieties of input proved valuable, but which was more important to me? If you said the suggestions focusing on content, you'd be correct.

The supply of grammar checkers is nearly boundless. Each and every year the world's colleges pump out countless folks who can explain the difference between an interpunct and an interrobang.

Meanwhile, the number of readers who can provide constructive comments on a niche book focused on the pricing of software products is significantly smaller. While few readers would be upset by a missing comma, many would complain about content that did not impart a greater understanding of the subject.

So how can firms move away from selling milk and become known as vendors of cream?

Here are a few ideas:

Interested in getting into the cream business? Then you'll certainly want to hire me for a business consult! 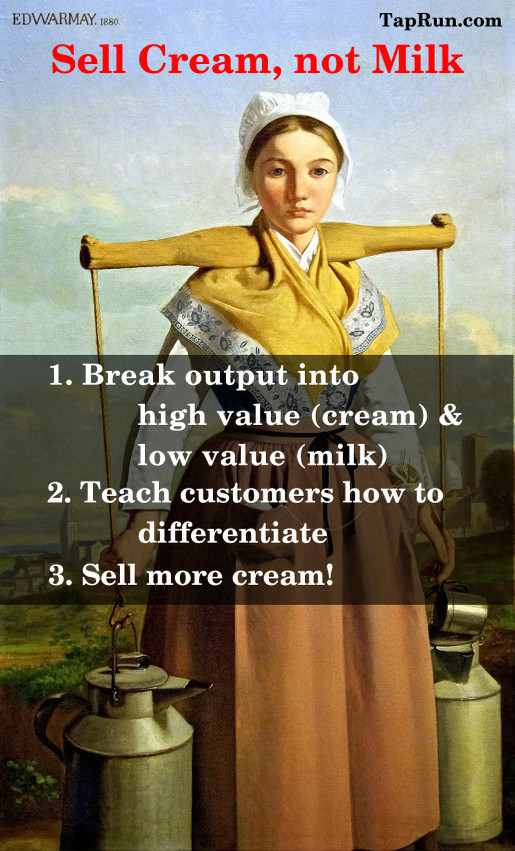